In HAVEMEYER STREET, viewers observe gentrification through the eyes of small business owners and residents on Havemeyer Street on the Southside of Williamsburg, Brooklyn. Behind artifacts of the luxury condo boom in this rapidly transforming neighborhood, viewers find two sides of a street in transition, where the evidence of change is visible from block to block. Varied experiences and vignettes weave a portrait of gentrification as understood by the people who live and work on Havemeyer Street.

Viewers walk around a wall of hanging images depicting new luxury condos and lifestyles to find themselves observing the two sides of four blocks on Havemeyer Street in South Williamsburg. The hanging images are actual pages of real estate brochures, photographs of new luxury buildings in the area and a map of the street. The two-channel video projection contains images and interviews from Havemeyer Street between Grand and South 4th Street. Each projection is a side of the same street and the two projections work together, both visual and aurally. As the images move up and down the street, viewers meet different characters, hear different experiences and begin to see changes over time. 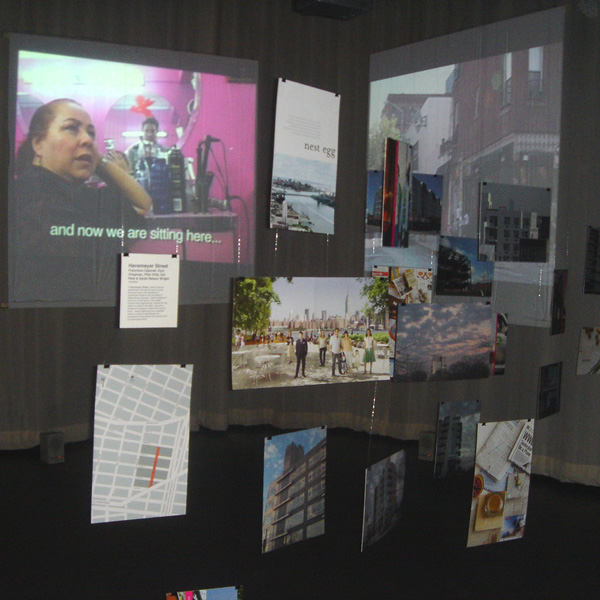 Video from IMAterial (first minute is silent with shots of the installation, followed by a sample from the two video channels shown as split screen):

HAVEMEYER STREET contrasts developers fantasies with documentary images and sound of the actual experiences of residents and store owners. Storeowners and residents describe how they are experiencing gentrification, revealing different understandings of a rapidly changing neighborhood and the people and businesses who are fighting displacement. The piece provides a launching point for conversations about gentrification, community and displacement.