The Newtown Creek Armada was a public media art project that explored and revealed the Newtown Creek. Located on the border of Brooklyn and Queens, this EPA Superfund site is one of the most polluted bodies of water in the United States. The Armada brought people to the Newtown Creek, both physically and remotely, to encourage public engagement, knowledge, and stewardship of this neglected waterway.

THE NEWTOWN CREEK ARMADA public art installation took place over four weekends in September 2012.  This installation invited the public to the Newtown Creek Nature Walk to participate in a remote-controlled model boat pond, with a fleet of nine artist-made miniature boats, each constructed with materials found on the creek that represented its past, present and future.  Each boat was outfitted with a waterproof video camera, allowing participants to document the hidden world of the creek’s waters.  These videos were shown on a monitor on site, alongside the ARMADA PORTHOLES (see below).

Approximately 1000 visitors participated in the installation, traveling to a remote park on the grounds of a sewage treatment plant in Greenpoint, Brooklyn.  The installation included several special events with community groups and school groups, including a launch event with George Trakas, the designer of the park.  This installation was written up in the Wall Street Journal, the New Yorker, and Wired, and featured on WNYC, ABC News, and The Brian Lehrer Show.

The Newtown Creek Armada was originally commissioned by the North Brooklyn Public Art Coalition. This community arts organization was founded by Katie Denny Horowitz, currently Director of External Affairs at Socrates Sculpture Park. The Armada was presented with support and assistance from the NYC Department of Environmental Protection and the North Brooklyn Boat Club, and received grants from the Hudson River Foundation, Brooklyn Arts Council, In Our Backyards (ioby), Macktez, and Feast Brooklyn.

In 2014, several galleries exhibited installations of THE NEWTOWN CREEK ARMADA in group shows, including boats and edited videos from the archive: the Newhouse Center for Contemporary Art, an established contemporary art space on the Snug Harbor campus in Staten Island; Proteus Gowanus, a micro-museum and gallery in Brooklyn; and AHA Fine Arts, a commercial gallery on the Lower East Side. 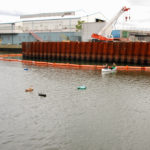 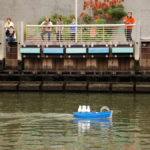 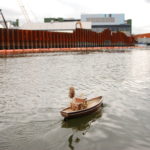 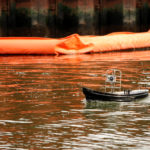 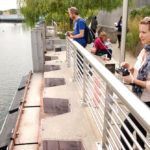 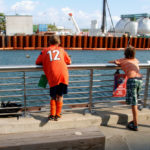 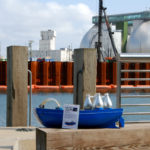 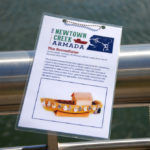 The ARMADA PORTHOLES are three video sculptures that transport viewers to remote areas of the Newtown Creek: Maspeth Creek, English Kills and Dutch Kills. Each porthole invites viewers to peer inside and experience a unique video voyage on a continuous loop.  To create the videos for the portholes, the boats of The Armada’s fleet were outfitted with underwater video cameras and piloted through oil slicks, sand storms and decaying infrastructure, revealing layers of history, urban infrastructure, devastating pollution and resilient flora and fauna.

The Portholes were first installed at THE NEWTOWN CREEK ARMADA (2012), and have also been exhibited independently at Dumbo Arts Festival (2012), Brooklyn’s leading public art festival; Pioneer Works (2013), an internationally recognized gallery;  Building 92 at the Brooklyn Navy Yard (2014), a museum of industrial history; and, most recently, with the Queens Museum (2016), as part of a series of public art events commissioned for the launch of author Rebecca Solnit’s book Nonstop Metropolis. 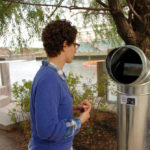 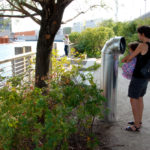 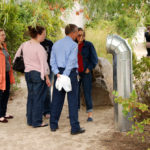 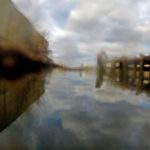 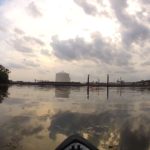 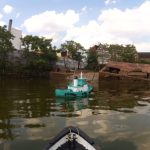 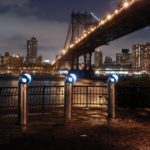 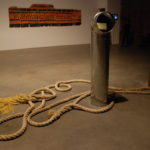 ENGLISH KILLS VOYAGE is one of the three videos in the ARMADA PORTHOLES.  It is an observational documentary of a contaminated tributary at the very end of the Newtown Creek, created from footage filmed with The Armada boats. While the other porthole videos highlight vital infrastructure and the return of nature, ENGLISH KILLS VOYAGE shows the devastation wrought by continuous pollution on this waterway, which is the site of the largest urban oil spill in the United States.

REMOTE VOYAGES was a 5-channel video installation that revealed the interplay of nature, industry and pollution on the Newtown Creek using the archive of video documentation created by the artists and the public for THE NEWTOWN CREEK ARMADA.  In REMOTE VOYAGES, the boats of The Armada traded their video cameras for projectors, sharing their voyages along the creek, while floating on water-filled platforms created from industrial flotsam discovered on the New York waterfront.

This installation was presented at the 111 Front Street Galleries in Dumbo, NYC, which was an international arts destination programmed by Lisa Kim, former Director of the Dumbo Arts Festival and current Cultural Affairs Director at Two Trees. 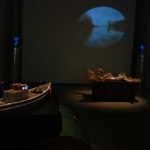 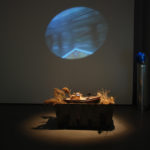 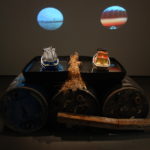 In Summer of 2013, The Newtown Creek Armada joined forces with NYU’s Dynamical Systems Laboratory to create GOWANUS VOYAGE for the Metropolitan Waterfront Alliance’s City of Water Day. This public art installation brought the boats of The Armada to the Gowanus Canal, Brooklyn’s other EPA Superfund site.  Created in collaboration with the Brooklyn Atlantis project, The Armada boats were newly outfitted with environmental sensors that live-streamed data visualizations to the shore, allowing visitors to this installation to pilot the boats in support of in a citizen science initiative.

GOWANUS VOYAGE was created in partnership with Proteus Gowanus, a gallery located on the canal.  In Fall of 2013,  the materials and data collected at the public art installation were added to their Hall of the Gowanus, a micro-museum dedicated to the Gowanus Canal, in an installation that included photographs, artifacts, underwater video, scientific data, and a boat made of old circuit boards found in the canal. This installation was exhibited for three years, until Proteus Gowanus closed its physical space, and remains in the Hall of Gowanus collection.  Elements of GOWANUS VOYAGE were recently exhibited in the Flux Factory show Self-Storage (2017) in a new iteration called GOWANUS VOYAGER. 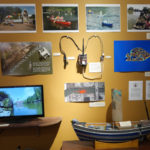 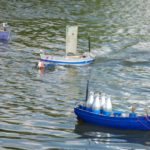 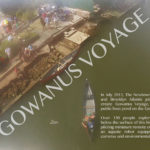 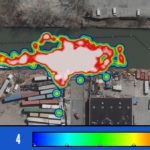 COMBINED OVERFLOW was a group exhibit curated by Sarah Nelson Wright, Nathan Kensinger, and Laura Chipley, and presented by Proteus Gowanus in their main gallery space in 2014. This exhibit showcased creative responses to the Newtown Creek and the Gowanus Canal, two New York City waterways with similar histories of industry, pollution and neglect. It included twenty projects created by scientists, filmmakers, engineers, photographers and designers working with laboratories, boat clubs and environmental organizations, who the curators encountered while working on their own public art installations on the Newtown Creek and the Gowanus Canal. 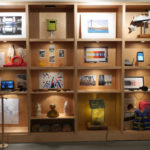 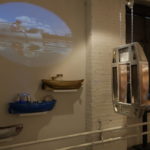 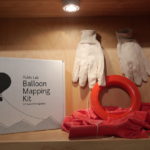 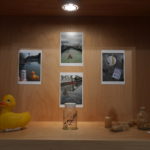 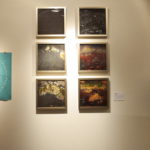