Invisible Seams is a project by Sarah Nelson Wright in collaboration with composer and writer Jennifer Stock.  In its final form, currently in development, the project will be a site-specific, augmented reality and audio walking tour.  This project includes:

INVISIBLE SEAMS will reveal how environmental and ethical issues in the globalized fashion industry are woven into the clothing we wear. As participants walk the streets of SoHo, they will listen to an audio narrative that guides them through the neighborhood, blending the voices of garment workers, fashion activists, industry players, and cultural theorists with soundscapes from factories abroad. At designated points, participants will be invited to use augmented reality, which will trigger their smartphone to superimpose photo and video imagery showing the fashion industry’s impacts directly onto storefronts, billboards, and the streets.  Through the audio narrative, participants will learn about the history of SoHo, the globalization of the fashion industry, the rise of “fast fashion,” and the ethical and environmental impacts of clothing. Participants will meet garment workers sewing in free trade zones, American workers from 100-year-old factories, historians, union organizers, designers, and activists.

SoHo, a former center for garment manufacturing in the United States and the birthplace of America’s labor movement, has evolved into an international center for fashion consumption, making it an ideal site to raise provocative questions about social progress.  By using augmented reality, INVISIBLE SEAMS will transform spaces of fantasy and advertising, like store windows and billboards, into portholes to the unseen world of production.  The project reanimates the connections between workers and consumers that are largely obscured at postindustrial sites of consumption. INVISIBLE SEAMS will provide a framework for examining the broader consequences of globalization and its relationship to climate change, uneven economic growth, and human rights violations.

This project is currently in post-production.

Field Research and Production in Sri Lanka and India:

Images and writing from this research trip were included in the exhibit People Made These Things: Connecting with the Makers of Our World at the Phoebe A. Heart Museum of Anthropology at University of California Berkeley.  This yearlong exhibit examined cultural and art objects in the Hearst’s extensive collection through the lens of what is known about the maker.  Wright was invited by the curators to include an installation about her experience and research in Sri Lanka, connecting the themes of the show to consumerism, mass production, and globalized workers today.

The Hearst Museum was founded in 1901 and has a collection of 3.8 million objects from around the world.  People Made These Things was curated by Head of Education and Interpretation Adam Nilsen, PhD, and Head of Research and Publications Ira Jacknis, PhD, and was visited by an average of 200 community members a week, along with class visits from the University of California and local secondary schools.

Curatorial Statement for People Made These Things: Connecting with the Makers of Our World. 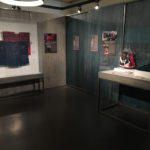 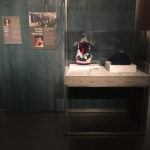 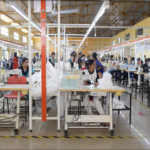 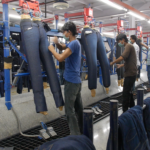 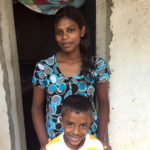 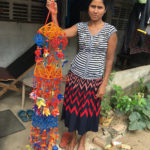 Wright was granted a Junior Faculty Fellowship Leave by Marymount Manhattan College to continue research and development of INVISIBLE SEAMS.  During this leave,  she traveled to San Francisco and Los Angeles to collect media in fiber farms and factories, and to interview local textile producers, activists, technologists, designers, factory owners, workers, and worker rights advocates.  This trip included filming in the only fair trade certified factory in the US and interviewing the founder of the Fiber Shed, a organization that promotes climate-beneficial local textile manufacturing.

Elsewhere is a nationally-known museum, “set within a former thrift store that re-invents old things to build collaborative futures” (Elsewhere website).  Elsewhere Residencies are by application to an open call, juried in a “robust, multistage process that involves past Elsewhere artists, state and local arts professionals, community members and Elsewhere board members,” and are highly competitive.

The research and production materials for INVISIBLE SEAMS from North Carolina were presented as part of Elsewhere’s First Friday Exhibit in February 2018. 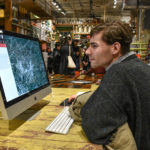 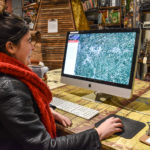 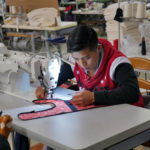 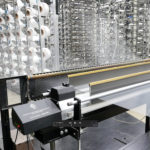 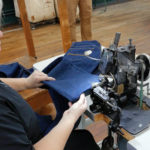 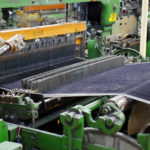