I wrote up my thoughts after attending Obama’s inauration, and would like to finally share them!  I can hardly believe it’s February already. 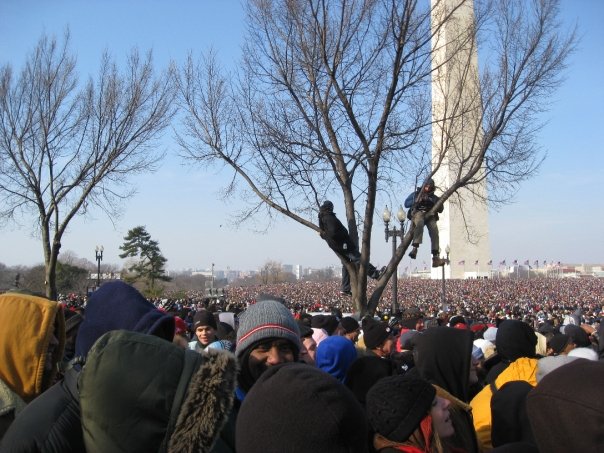 I just returned from a trip to DC to witness Obama’s inauguration.  It was an amazing weekend, especially because I was visiting with my dear friend Yacy, a former Kerry campaign worker and recently naturalized American citizen.  The moment was huge because not only did this country get to say adios to Bush after eight torturous years, we also welcomed our first black president (in fact, our first non-white president at all).

The experience of standing on the mall itself had its highlights: screaming with joy after Obama took his oath, tearing up thinking about Martin Luther King, downing vodka shots from a water bottle to try to stay warm, feeling like we might never escape the crowds, and, of course, admiring Aretha Franklin’s hat.  I wanted to be there to mark this moment because Obama’s election has altered something for me.  I have witnessed a major change in our country, and while I do not think everything will now utopianize, I feel newly faithful that it is possible for people and society to change.

Everyone is wondering if Obama can fix our nation’s problems.  I think I can save us the suspense: he will not.  Certainly I am hopeful that his administration might move things in a direction I would favor, but a President is a politician and, moreover, a human being.  Like everyone, I have been thinking a lot about Kennedy, the president who inspired my parents’ generation.  As a president in action, I find him uninspiring.  As a symbol for the potential of democracy, I find him absolutely essential to the American story.  And can you imagine that Kennedy had to overcome a cultural biased against Catholics?  Today we find that silly. Surely Vice President Biden did not have to defend his Catholic faith in this election.  I hope someday our country will look back and think how absurd it was that the color of a person’s skin had grave bearings on his or her opportunities.

As an artist, I don’t see symbols as separate from reality.  Symbols are how we make our reality. In the days of Manifest Destiny, when settlers began to conquer the frontier, America was often represented–in posters, political cartoons, and illustrations–as an angelic white woman, a symbol of purity and goodness.  Threats to America were embodied by a native or black man, grotesque and with Simeon features, who pursued the woman licentiously.  This woman was to be protected from this man; the imagery was used to call white male citizens to police and expand America’s borders, both actual and imagined, by striking at deeply seated fear of the other.  To remember the depth of fear and hatred in this racist past and to be alive today when our country, both in fact and in symbol, is represented by a black man is nothing short of extraordinary.  Things can change; they already have.

I wouldn’t have put it so boldly as one Republican congressman, who said on CNN that the inauguration had erased years of racism in one fell swoop.  It is essential to remember America’s racist past and to recognize that it is not over.  Instead, I see that by electing a president who could not have been elected 60 years ago, let alone allowed to drink from certain water fountains, this country took a monumental step forward and showed that things can truly change.  Barriers that divide people, however real in daily life, are made.  And they can be unmade.  We can unmake them.

I hadn’t thought much about Martin Luther King recently until I stood on the mall for the concert and the inauguration.  During the election, I thought hopefully that we might move on from Bush, that Obama was intelligent and someone with whom I somewhat agreed and definitely respected, that maybe he could win, though like everyone I worried a bit about the race factor, and that he certainly he is charming.  During and after the inauguration ceremonies, I thought about how incredible it is that during Dr. King’s time, this simply could not have happened: a smart, capable and charismatic man would not have been considered for president because of racism.

But I also thought about the cries this week that Dr. King’s dream had been fulfilled, and I don’t think Dr. King would agree.  Dr. King dreamed that EVERY man, woman and child would have equal opportunities.  While I can imagine that we may be getting closer to electing a female president, I don’t think this country has overcome all prejudice just yet.  Would we elect a practicing Muslim? An atheist? A homosexual?  A deaf person?

I don’t think we will today, but we will tomorrow.  And we will do it the same way that led us to elect Barack Obama: through civil rights movements and through love.

We all know the social, political and legal milestones that brought rights to black people in this country.  At the risk of sounding completely cheesy and irrelevant, I submit that we also continue to overcome the deep seeded prejudices in our culture, those that persist long after the legal battles have been won, with love: romantic love, love of children, love between soldiers, friends, coworkers, neighbors.  Love is the only way to get beyond tolerating each other and to actually embracing the human truth that we are all infinitely different.

And that is why I also celebrate President Obama as an interracial person.  In a country that in the not-so-distant past had laws against miscegenation, and where racial homogeny continues to exist in our imagination, if not in our practiced lives, we elected a product of interracial love to our highest office.  Yes we did.

And someday we will have true equality in this country.  In 60 years I would be 87.  I hope to live long enough to see the next great stride and to stand on the mall and remember this one.