A project by my friends and fellow IMAers Laura Chipley, Francisca Caporali, and Pilar Ortiz got me thinking about the changing meanings of public and private spaces in an urban setting. These psychogeographically inspired artists are planning to take up residence in a temporary dwelling in public space, constructed entirely from the wealth of the street economy, as part of their Urban Homesteading Project. The project will transgress traditional boundaries of private and public life.

These boundaries are, of course, crossed on a daily basis by the homeless, who are forced to live out their private lives in public spaces. Privacy can be a privilege afforded by wealth — or sometimes forfeited.

Living in Williamsburg during the rapid construction of large condo buildings, I’ve noticed that the unifying design element of all the new construction is floor to ceiling windows.

I like to walk on the McCarren Park track at night after sitting at my desk all day, to clear my mind and loosen up my body. Every time I wind around the track, I look up at the bank of tall condo buildings along the track. People inside are going about their business: walking around, fixing dinner, drinking, watching TV.

This is strange reversal. People are paying to have no privacy, choosing to allow others to watch their private lives from public space. I think there may be more behind this new architectural trend then simply the desires of the so-called noveau riche to display their means. 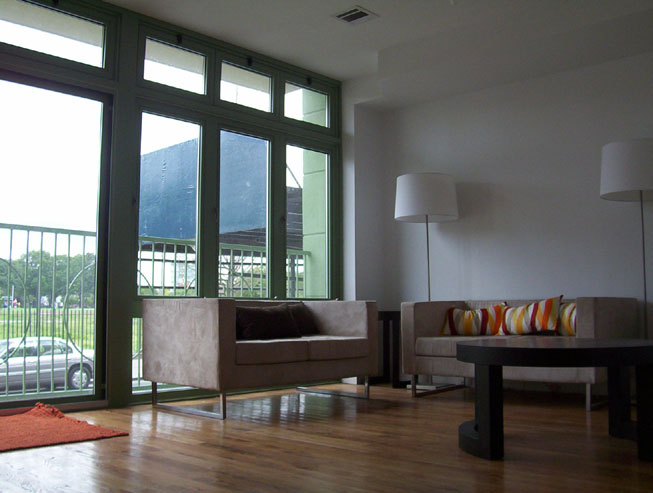 Two things strike me. Many people feel isolated in the city when they are not integrated into a community. Being seen validates our existence. This is why so many people (including myself) blog: if I didn’t care if anyone knew my thoughts, I wouldn’t bother to write them down and publish them. A fishbowl apartment could be a subconsciously comforting way to be seen.

The other thing is the contrast with the old model of wealthy living. The wealthy have traditionally had the option to shut the public out of their lives; to retreat to their homes and close the gate, literally or metaphorically.

Perhaps these new condo buyers are rejecting this old model. Instead, they will include the world, at least visually, into their home. I don’t see this as necessarily radical; just different and maybe more transparent. We don’t have to wonder what a wealthy home looks like. We can just take a look.

The income gap has never been so visible as when someone without the option for a private life picks through the trash in front of the living room of someone who paid for their private life to be public.