On Sunday evening, I attended a talk on “Top Secret Steve Lambert Project,” which, it turns out, was top secret for good reason. I first met Steve Lambert on the green pastures of CUNY-Staten Island University, where he was the professor for a class called something like “Writing in Advertising” but actually teaching how to use the tools of advertising for subversive action. Go, Steve! Steve will be teaching Culture Jamming in my MFA this Spring and has the most exciting business card I have ever been privileged to receive.

“Top Secret Steve Lambert Project” is actually “Ronald’s Crisis,” (what I would call) a tactical media project. Steve and his co-conspirators closed all 85 McDonald’s stores in Manhattan (yes, there are 85) by taping handwritten signs with the Mickey D’s logo in the corner that read “Closed for Evaluation.” They then staged a press conference at Union Square where Ronald publicly declared his crisis of conscious about McDonald’s practices. Keep up the with project and see more pics here. 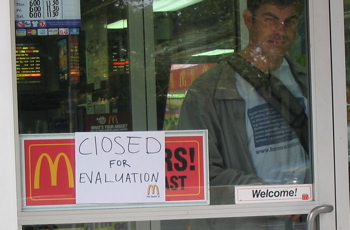 photo by madelin, monica, and ben

Sunday’s talk about the project at Conflux was good, but I don’t think the impact of the project can truly be experienced until you tell someone about it. As Steve pointed out, the impact of the project is the legend of closing all 85 McDonald’s stores in Manhattan. Sitting in the talk, it wasn’t as easy to imagine as it was sitting in my room telling my roommate and her boyfriend about it. Seeing their eyes pop open as they wondered allowed if Steve would be sued for lost revenue and how the sheer mechanics of the thing worked definitely allowed me to understand the power of the story. Plus, the fun experience of telling the story means it’s sure to spread.

Steve is a scholar/practitioner of how to use these sorts of tactics to change people’s behavior. As he puts it, the idea that McDonald’s is bad for you, the environment, etc., is common sense.  Yet many people still eat at McDonald’s in New York City, despite a plenitude of, if not healthy, at least more healthy and certainly more interesting cheap food. Steve’s projects, as I understand them, are aimed at bringing people a step further, to use their common sense knowledge to actually change their behavior. They are prompted to do so by the fun, subversive, interactive nature of the projects, but also the space that the projects create for critical reflection.

I think the talk got a little bogged down in trying to figure out why these people are eating at McDonald’s. People suggested Steve do surveys or some sort of video interview project. I’m sure this would be interesting and informative, but I don’t think it’s necessary. Unless you are an absolutely perfect consumer, you need only look at your own behavior to figure out why people shop in corporate outlets and what the obstacles are to making better choices.

I have not eaten at McDonald’s since I was 10 years old. When it comes to food, I am, I would say, a highly conscious educated consumer who 90% of the time purchases according to my personal health, environmental and political beliefs. (The 10% that is not to my beliefs is the excessive packaging of takeout and many other foods).

So perhaps it would bewilder me why people would eat at McDonald’s. But in truth, it doesn’t at all.

The day after seeing Steve’s project, I went shopping with my mom. I needed new undershirts.  Bewildered by where to go, my mom and I tried J. Crew (gasp!) which failed to have even the undershirts, and then Macy’s.

Standing amongst the Calvin Klein underwear holding a mass-produced ribbed undershirt made in Egypt, I kept thinking, “How did I get here?” I like local manufacturing. I want fair wages for everyone. I support small business. I value things that are unique. I would rather wear organic cotton. Yet, there I was buying the $15 Calvin Klein undershirt I am wearing right now as I write about informed consumer choice.

I don’t know where to get clothes I can afford that support my values. In my experience, there is Macy’s (or TJ Maxx) and there is expensive unique boutique. I’m sure to another person, one who knows where to get good cheap clothes, it would seem absurd, the way going to McDonald’s when there are so many other better healthier choices seems absurd to me.

I think we need inspiration, or even just reminders, to seek the other choices. Life moves by quickly and we all pick our battles. I know where to get good cheap food because I care about it enough to do research and figure it out. Reflecting on Ronald’s Crisis and recognizing my hypocritical behavior with clothing made me want to find out how I could match my clothes shopping behavior to my food consumption behavior. The Ronald’s Crisis team emphasized trusting in people’s intelligence as a a guiding principle. Like with the Theft and Rescue project, I appreciated my ability to do my own analysis and come to my own conclusions.

Because the project is in the street, in the environment we live in, and it transforms that environment, it impacts us differently than, say, reading an article that tells me McDonald’s is bad (which, according to Steve, we all already know).  It intervenes at the moment of the behavior, collapsing the distance between our theoretical lives and the lives we actually live.  Because the story is so dynamic and unusual, it lingers in our thoughts: it visits me as I shop at another corporate outlet; I tell the story to people I like to amuse.  Interestingly, Steve said that his biggest audience is not the people in the street; it’s the people who read about the event on the internet.  In either case, the moment that the project attempts to inform (and ultimately transform) is the moment of choice; its power lies in its ability to be present in that moment, whether marked in our sight or in our mind.